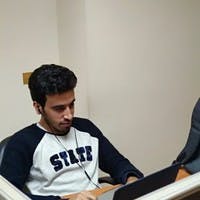 As you might already know it’s healthy to produce small docker images with only the needed dependences for your software to work properly.

Being small in size, means more efficiency in your pipeline and deployments, It’s small to download, small to push. So keep that in mind when you are building a docker image for anything.

There is some generic guidelines that you can keep in mind while building your own docker images, at the top of my mind:

Our Dockerfile for Python

We will write a simple Dockerfile for python and install some dependencies just for the fun of it. And here is the main points the we need to focus one:

As you can see above a simple Dockerfile that uses Python 3.7 alpine image, and applies the rules we defined above to make our image small.

Also notice the syntax of apk, let’s break it down:

What about the pip command, something special ?

Yes, have you noticed that --no-cache-dir it asks pip not to store cache files at all.

In the same layer (same RUN command) we are also deleting those deps that we don’t need anymore, and they did their job building the packages during pip install ... process. The syntax is easy, we ask apk to delete the virtual namespace with all the packages that were installed to it.

That’s it your done ! maybe let’s check how much space have you saved after modifying your Dockerfile.

Checking size of the images

Now it’s time to check the size of the new image, probably check first the old image before modifying Dockerfile, and after, Let us now much did you reduce !

Using docker command in the command line, get list of images:

more specifically you can grep for your image name, i will just grep python

in the last column, you can see the final size of the image, above there are 3 python alpine images, check the size of your old image, and then build the new image and check it’s size !